We didnt recognize this email. Please enter a valid email address.
A password change link has been sent to your email address. Please check.
×

Mum-of-one Chelsie was approached to attend the Cash Wise sessions at Maypole Children’s Centre, Ossett, after taking on a WDH property nearby.

She was really keen to attend but was concerned about arranging and paying for childcare for her young son, Ben, while she attended the sessions. 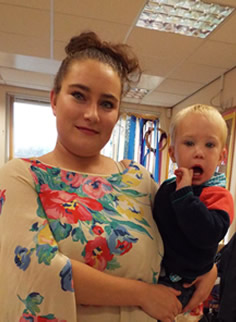 Cash Wise was able to pay for Ben’s place at the crèche at the children’s centre while Chelsie attended the sessions. Although, like all mums, Chelsie was still quite nervous about leaving Ben with someone other than family, she agreed to give it a go.

There were plenty of other mums at the first Cash Wise session whose children also attended the crèche, and after a bit of reassurance she was able to relax and enjoy the sessions.

As the weeks went on, both Chelsie and Ben became more settled. By the end of the five weekly sessions, Ben was really enjoying crèche and Chelsie had completed her Cash Wise course.

Chelsie said: ‘I think that Cash Wise is an excellent course, run to an excellent standard. It is amazing that childcare and food are provided. The team is really patient, and I would recommend Cash Wise to everyone’.

She is now enjoying her new WDH property and hopes to get Ben into crèche on a more regular basis.

Chelsie has become such a big supporter of Cash Wise that she agreed to provide one of the voice-overs for an animated video promoting the scheme. Chelsie voices the character of a young mum in the healthy eating scene.

She said: “The Cash Wise advisors really helped me a lot when I attended workshops and I wanted to help encourage more people to do the same.”